How to play custom videos on the audio reactive screens

An important feature of the streaming studio environment, is the audio reactive video screens surrounding the DJ booth. The screens react to the audio being played, by changing intensity and color in sync with the music and by switching between videos when a change in energy is detected (ex: when a track “drops”).

By default the screens playback a collection of videos built into the app, but users can easily load and playback their own video files. 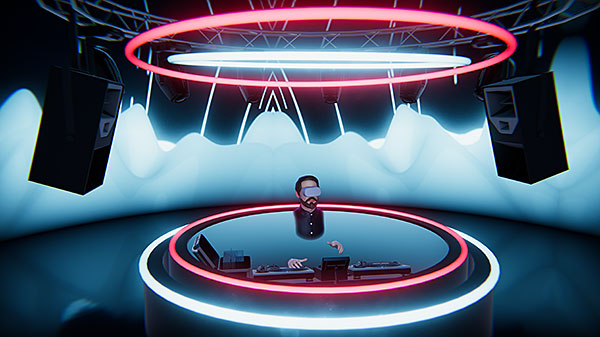 When the streaming studio environment is loaded and the audio reactive screens become active, the application searches for all compatible video files in a specific directory.

The following steps explain how to create that directory and play the videos in the application:

All compatible video files in the folder (excluding subfolders) will be loaded by the application.

If more than one video is found, the application will switch between the videos randomly when a change in the music’s energy is detected.

Vinyl Reality analyses the audio signal that plays through the master output of the mixer in real-time and tries to detect the beats as well as the changes in the energy of the music that is playing.

It is strongly recommended to first read the section regarding energy level detection on the audio analysis in Vinyl Reality page before continuing.

Each video file can be assigned to one or more energy levels, so that it only plays during certain parts of a track, by simply renaming the file to include one or more predefined strings that can be parsed by the application when the file is loaded.

These strings are _Low, _Normal and _High which correspond to Low, Normal and High energy levels.

For example, given a video file originally named Music Visuals.mp4, it can be renamed to:

If the file name does not include any of the predefined strings, it will be assigned to all energy levels.

If multiple videos are assigned to the same energy level, a random one will be selected when the energy level changes. When the application transitions between two videos, the current video is paused before playing the next one, and will resume from its previous playback position when it is started again.

If not all energy levels are assigned by the users custom videos, the application’s built-in videos will be used for the missing energy levels.

Unity (the game engine Vinyl Reality uses) supports a bunch of video file formats and codecs, but for the best compatibility and performance it is recommended to use H.264, in the .mp4, .m4v, or .mov format.

If the video file contains an audio track, it will be muted and not audible in the application.

So to summarize, the recommended video settings are:

All videos loaded into the application will automatically be played back in grayscale, and the color scheme for the current energy level will be applied to the video so that it better matches the rest of the environment.